That pretty much sums it up I guess.

Congrats to Sarah Meyers for her new show Pop17 which launched today. The show is a “a daily exploration to track, analyze and understand the new cultural phenomenon of online micro-celebrity.”

You might think I’m biased because I’m close to Sarah but I truly think it’s an excellent show – neat topic matter, the production is really sweet and Sarah is exceptionally great on camera. I’m expecting this show to become one of the biggest, most popular daily shows out there.

Great article on Rocketboom with Joanne, Alex Albrecht of Diggnation, Xeni Jardin and Mark Frauenfelder of BoingBoing and Ze Frank. 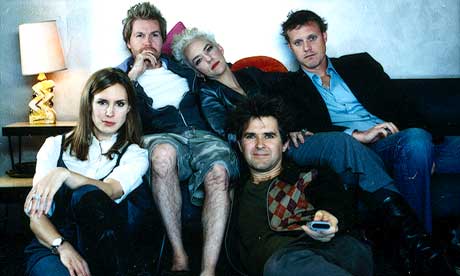 “Among the youngest Internet users, the primary creators of Web content (blogs, graphics, photographs, Web sites) are not misfits resembling the Lone Gunmen of “The X Files.” On the contrary, the cyberpioneers of the moment are digitally effusive teenage girls. ‘Most guys don’t have patience for this kind of thing,’ said Nicole Dominguez, 13, of Miramar, Fla., whose hobbies include designing free icons, layouts and “glitters” (shimmering animations) for the Web and MySpace pages of other teenagers.” – NYTimes

Protests against The Church of Scientology were held by Anonymous at 11am this morning in cities and towns around the world, often with hundreds of people per location, and by now, at 6pm ET, they’ve mostly swept the world. Rocketboom correspondents were covering the protests in several cities for our Monday episode and as the footage is rolling in, I’m noticing something very interesting.

Most of the footage reveals there were no main stream media on hand. Did they ignore it? Not understand it? Did they think it wouldn’t happen? The number of people that actually turned up was greater than many other protests that get much wider coverage.

This is also an extremely interesting cultural phenomenon with regards to the real world power of the people of the internet – the proxies you often think might just be bots.

I find it odd that the MSM is that out of touch. This event is hard to miss for anyone who is plugged into online culture. I had a look at Google News and there are no MSM mentions for this event. No CNN, no NYTimes, no nothing but a few blogs and left-wing political papers.

For the last several days I’ve been researching the main internet sub cables wondering what could of possibly led to all the breakage (explained visually today on Rocketboom):

Now I understand how easy it is to knock out the Internet.

What’s interesting is that no authorities are talking about it and the domain, so to speak, belongs to private business.

While traffic was clogged mostly for the Middle East and India, I was following the global Internet traffic reports and Iran was the one country that had zero throughput, all weekend long.

There are a lot of conspiracy theorists in the world and I’m not one of them. With regards to this event? It seems like there is really no other way of understanding the cause of the breaks without first assuming that they were intentional.

While it’s an interesting mystery and I’d love to know who cut the cables, more interesting to me is what I leaned about the vulnerability of the the main arteries of the internet. Speaking of decentralization, I think we are in need of more mesh.

Alot of people are talking about Twitter being down.

I have recently called for Twitter to decentralize, I believe the features of Twitter can be covered by Tumblr, and now I realize that I’m a dedicated Twitter user and plan on staying that way. I cant explain all of the reasons why, but I am sure that its really great and I love it.

So I thought it was a great time to finally bust out my Twitter 404 Art Collection that I have been working on for almost a year. I hope you enjoy it, please send me any screen-caps of official Twitter down designs you have come across and look for a Twitter Down Art meet-up here in NYC in coming months.

Totally Stressing out a bit. Submitted by Britney Mason:

Overflow, shutting down for the night:

Down for Database Replication Catchup:

I think this one is inadvertent:

Some experts suggest this work may not be authentic:

(S)he’s back. Less faded than before, and almost no padding on top. Noted: Most of the down messages from the early days above show each message is in a speech-bubble, being said by the twitter logo, or, what twitter has to say itself. No longer.