Video platform equality, from the labs of Rocketboom R&D and Mag.ma: In today’s age, we don’t judge books by their covers. We judge them by their thumbnails. We also judge videos, e-books, software, and people the same way. Engaging an audience demands engaging them visually, no matter the medium. Some of our peers in the online video community recently noted that Tumblr allows the display of thumbnails for YouTube embeds on their dashboard, but other popular video sites, such as Vimeo and Blip.tv, are currently left out from showcasing their user videos with a thumbnail image.

Rocketboom R&D, the development unit of the Rocketboom network, has created a simple solution: a browser add-on that allows Tumblr users to see any video’s known thumbnail in their Tumblr dashboard. There’s no platform favoritism; this enables nearly every other common video platform the ability for thumbnail display. The add-on was created using Mag.ma, our own video aggregation service, to do thumbnail lookups for numerous video platforms with our simple API methods. The results? Uniformity for Tumblr users and creative support for content creators.

Get your browser add-on for Firefox, Chrome, or Safari, and visit the Tumblr Video Thumbnails add-on page for information, installation help, and more. Special thanks to our friends at Vimeo, Blip.tv, and Wreck & Salvage for their testing and support.

And big props to Greg Leuch for leading the entire project!

When you think of Rocketboom, you probably think of a daily show called Rocketboom. Yet Rocketboom has been quietly growing and we now count four full-fledged shows in our network: Rocketboom Daily, RocketboomTech, Rocketboom NYC and KnowYourMeme. So we’re giving them all a little more elbow room with their own YouTube channels. And they’re pretty good-looking too thanks to our ace lead developer & designer Greg Leuch and photos by the inimitable Diana Levine. 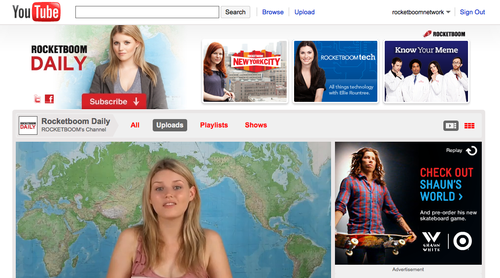 I’ve always wondered about large scale web trends – the over arching movements, or trends, that define certain periods of the web. The Dot Com Boom. Web 2.0. The Real Time Web. The Mobile Web. If you have ever seen me speak, there is a good chance you have seen my talk on The End of Time.

The premise of The End of Time, as it applies to the internet, is that we are there now. The meaning of a “real time web” as its labeled today, is one where the amount of time it takes to get information from me to you is practically irrelevant. The activity on the web recently moved beyond issues of time, now focusing on filtering through everything that is already there. In filtering the message from the noise, today we find ourselves enamored with geo-location service like Foursquare which brings us information instantaneously about our nearby surroundings.

Each March, I like to recap on my experience of SXSW interactive and focus in on the major movement of the year. I’ve taken special note since Rocketboom came out of SXSW with major steam during the much talked about ‘online video’ movement in 2005. The following year, videoblogging went mainstream with the purchase of YouTube in 2006. The next year, in 2007, Twitter hit SXSW big-time, and the first adopters were talking all about it. The next year, in 2008, Twitter hit the mainstream coming out of SXSW. At SXSW 2009, Foursquare was on everyone’s mind, and in 2010 during SXSW, it went mainstream.

Webtrends, it seems, appear to be happening in exactly two year cycles, and there appears to be two phases to each cycle, each occurring annually. In the first phase of a two year cycle, a new movement reaches it’s tipping point, becoming identified collectively by the first adopters of various internet sectors and subcultures around the world. This leads to the second phase, mainstream adoption.

Funny enough, while its not actually SXSW itself that dictates movements, the conference has traditionally provided the seasonal variables that bring the various first adopters together from around the world, and also the mainstream media, expediting and somewhat pushing over the edge each new boiling trend. It’s important to note that people may have been working on any web trend a decade or more before it’s identified collectively as a trend, yet a trend does not occur by the nature of the right idea, but rather the right idea at the right time.

Consider the following trends, matched by date, as they each appeared collectively in two phases (it gets  a bit muddier the further back in time we go, though seems to hold up):

2003 Online Photography is identified – May 25, 2003: The New York Times publishes an article reporting on the rise of photo blogs, citing the Pancake Bunny phenomenon as a primary example. [flickr, webshots? / digital camera]

So what’s in store for 2011? Having run it’s two-year course already, Geo-Location will become a darling. SXSW 2011 is going to be chock full of Geolocation services, no doubt, and these companies will be in style, continuing on for years to come as will filtering services of social media, online video and blogging, etc. The next movement is not easy to see this year, even to the most astute Digerati. This week, we will see SXSW release its panel picker, with more submissions than ever before as the conference continues to get larger and larger every year. This will give a bit of a window into some things, but much of this will change. Whatever it will be, we will see it congeal over this year and it may become evident this March. Personally, Im not willing to take the risk in suggesting the next movement this early – I don’t expect to see it until I experience it next year.

But darn it, I do have a hunch which I can’t help but consider just for fun. I don’t believe it at this point, but simply wonder if the next big movement will involve ‘Personal Banking’, or person-to-person business tools like Jack Dorsey’s credit-card reader, Square, which easily allows people to transfer money to each other. Dorsey’s fob already seems a bit antiquated to me for what can be done with today’s image recognition and a simple photo, or what could be done to bypass the credit cards all together. The credit card companies have been jumping in lately too, it’s the obvious next step. Aside from the government which seems to always need it’s tax, it should be easier for me to transfer money to you if I owe you $20 from last night, or want to buy your TV. Currently, the credit card companies make too much of the $ and it’s too consolidated into just a few companies. What about other forms of electronic money? With the upcoming political election happening over the next two years, the focus of all of that activity will center around one main objective: micro-donations from individuals. The easier it is for me to give money to my political party, the better. The political parties are setting theses systems up now.

Whatever happens, we shall see.

The other day I put out a challenge via Twitter & Facebook to put forth the URL of a better viral video tracker and no one had anything.

I wanted to make sure the authorities and the haters saw my challenge.

I sent out those tweets because I feel Magma is working really well in this regard, and I wondered who else is doing what we are doing. I don’t think anyone is, and so I put out this challenge. Knowing haters ganna hate I was prepared for anything, but have not heard from a single person yet refuting my claim that Magma is doing the best job at finding videos early in their rise to fame. I think its also the very best video discovery system out there, hand’s down.

Just based on empirical evidence alone, I think anyone would agree and thats why I’m putting out the challenge. Here are two neat examples that show how we do it:

The other day I saw this video on Magma’s Must Watch. Jason Kottke apparently found this http://kottke.org/10/08/badmitton-rant

Unbeknownst to Jason, we created a Kottke channel because we think Jason has a real knack for finding videos. We took the RSS feed from his blog and set it up as a channel to look for any posts that have videos mentioned. If there is a video, we add it to the http://mag.ma/kottke channel. [anyone can set up a channel of their own here: http://mag.ma/settings/import  – we did the same thing for BoingBoing http://mag.ma/boingboing TechCrunch http://mag.ma/techcrunch …all kinds of great sites. As you can imagine, if you strip out all of the videos from the CrunchGear blog, you get a pretty interesting channel: http://mag.ma/crunchgear

Regarding the video Jason found (see screenshot above), a few minutes later, it was on Magma. Then Magma noticed it was heavily passed around on Twitter and two hours later, by the time Magma found it on BoingBoing, the video moved into the top Must Watch section, eventually then hitting the Huffington Post a few hours after that and then becoming highly active around other blogs in general an hour after that. It’s also clear from looking at the history of it’s spread that the few Magma users who found this video (including myself) did not find it until it hit Magma’s Must Watch section. Though I do follow the Kottke feed myself, I don’t exactly have alerts going to my phone every time he posts a new video to his blog 🙂 But you could set that up if you wanted to, every channel also has its own RSS feed out, or you could use the open API.

“Video for the Fans”

While the example video from Kottke is a bit off-beat, maybe even absurd, Magma is also excellent and finding the very most popular viral videos that are ultimately propelled through the Mainstream. Ju

st the other day, this video with Justin Bieber was the catalyst for sending out my tweets because I was wondering who else is doing this? Magma had this video all the way to the Must Watch section when the view count was just four thousand. We found it was hot on Twitter, then it was found on a YouTube channel, and then by the time Videogum found it, all within such a short period of time, it entered into the Must Watch. And as you can see, later, it made it through the blog charts and eventually the Viral Video chart found it last.

So I’m looking around at all of these aggregators, there’s getting to be more and more of them, and yet I don’t see anything like Magma.

Magma is many things, and its still got many more on the road map though one thing I think we have tuned exceptionally well – the best in fact – is our ability to find videos early in their rise to fame. I think our home page and the Magma Must Watch page are the best charts out there for finding the most popular videos of the day. http://mag.ma/mustwatch The RSS feed for this channel is here: http://mag.ma/mustwatch.rss

So, do you know of a viral video site that finds videos sooner?

I think it is really strange that no one knows where their food comes from. You have no idea usually from what farm or what region the food comes from and when it was harvested or added to the store. I imagined it would be nice for someone to set up an FDA backed system that stamped all products each time they changed hands, so that if you were in the grocery store, for example, and picked up a package of bread, you could see all of the stamps such as: